Blog - Latest News
You are here: Home / Others / Great interest in metal detection technology from Mesutronic at the Powtech...

Kirchberg/Nuremberg. The Powtech, the leading trade fair for mechanical process technology, analytics and handling of powders and bulk goods, took place from 19 to 21 April 2016 in Nuremberg. With around 16,000 trade visitors and 891 exhibitors from 31 countries, the Powtech is one of the most important in the industry.

Mesutronic Gerätebau GmbH once again exhibited at the trade fair. As a manufacturer of metal detectors and detection systems, metal separators and X-ray devices, the machine manufacturer from Lower Bavaria offers trend-setting solutions for the industry’s challenges.

A particular highlight at the Mesutronic booth was the new autoTEST test system. The fully automatic testing system has been designed for checking performance and supports the user in his daily work. That saves time and money through less use of personnel resources while ensuring maximum process safety and product quality.

Mesutronic Gerätebau GmbH drew a positive conclusion from the Powtech 2016. Numerous national and international trade visitors took an interest in the metal detection technology from Kirchberg. Those responsible from Mesutronic reported that new projects were discussed and interesting contacts made.

You can experience “Metal Detection made in Germany” from Mesutronic again from 7 to 12 May at the IFFA in Frankfurt am Main. Mesutronic is presenting the “easySCOPE” X-ray device in at Booth D60 in Hall 11. 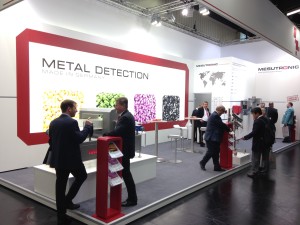 The Mesutronic trade fair booth at the Powtech 2016 in Nuremberg.

MESUTRONIC on course with expansion of the corporate structure

Mesutronic sales partner Roosjen N.V. from Belgium is “Partner of the...
Scroll to top